375 Epidemic Sound colleagues got together in Party.Space during the annual Spring Bash online celebration 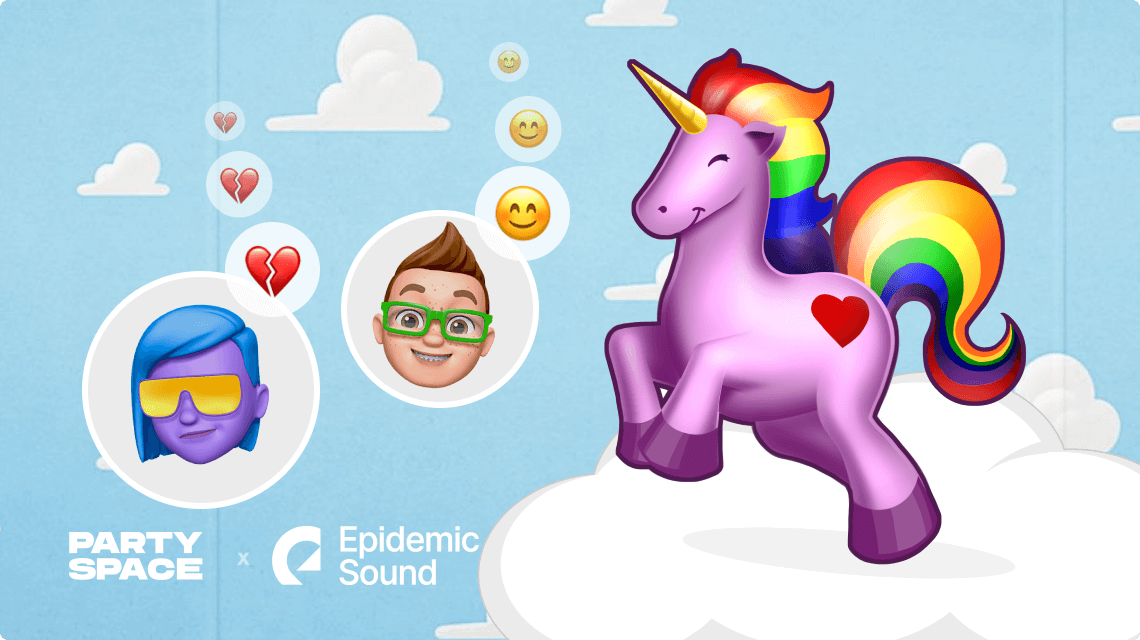 Epidemic Sound, the market-leading platform for restriction-free music headquartered in Stockholm Sweden, is on a mission to ‘soundtrack the world’. The company has democratized access to music for storytellers. In addition, its innovative digital rights model paves the way for creators to use restriction-free music. As a result, Epidemic Sound allows musicians to take their content to the next level while simultaneously supporting them financially and creatively.

Not so long ago, the company celebrated an outstanding accomplishment - achieving a billion-dollar capitalization and a unicorn status. On May 26th, 375 employees from 6 worldwide offices gathered to celebrate the news online. To conduct its yearly Spring Bash company-wide meeting, Epidemic Sound innovators partnered with Party.Space. Let's take a quick look at what came of it.

Working in an international company, and during Covid-19, it is difficult to imagine an event capable of gathering every employee in Stockholm (something the company used to do yearly for its Spring Bash gathering) safely in one place. Epidemic Sound has offices in Stockholm, New York, Los Angeles, Seoul, Hamburg, and Amsterdam. That's three different continents. The management firmly decided that the event should be accessible to their entire team, regardless of their location. It was also agreed that they would reject traditional means of communication like Zoom or Google Meet. Despite their impeccable reputation for telecommuting, they do not provide enough opportunities for informal meetings. They are perceived by employees as work tools and are not associated with a festive atmosphere.

The Epidemic Sound's management heard about Party.Space and its virtual events as a cool new alternative from other participants in the digital media market. In 2020 and 21, many of them turned their eyes towards tools that could improve informal communications and help maintain a corporate culture. After a bit of market exploration, it was decided that they would build an event using Party.Space as their platform of choice.

The main event would include a performance by the CEO, sets of famous DJs, and unconstrained communication between team members. If you have never taken part in events taking place in 3D virtual spaces, imagine any popular 3D video game. As a video game hero, any participant can move through space specially created by the organizers, including many internal locations. There were four such locations in Epidemic Sound’s space, each was represented by a separate room.

In the center of the main hall was a unicorn figure. As the team’s competitions and prizes were awarded, it slowly turned from uniformly white to being painted with all the colors of the rainbow. The culmination of the evening came when the unicorn was completely painted in seven colors and dozens of smaller shades.

Let's look at the key metric that will demonstrate how Epidemic Sound's team experienced the Party.Space event.

These numbers are many times higher than what the average Zoom party normally reaches. In addition, about 70% of employees took the initiative positively and said that they liked the event hosted by Party.Space. Not seeing each other for a whole year, the team was delighted with the meeting in a format that most closely resembled reality.

Considering the numbers, the unforgettable atmosphere, and feedback from employees, Epidemic Sound can confidently conclude that the event was a smashing success.

July 4th in the Metaverse: Ideas, Games & Activities for 2022

How Can the Metaverse Benefit from NFTs

How to Host a Successful Product Launch in the Metaverse

What is the metaverse and how to use it for your community?

By clicking “Accept All Cookies”, you agree to the storing of cookies on your device to enhance site navigation, analyze site usage, and assist in our marketing efforts. View our Privacy Policy for more information.
PreferencesDenyAccept